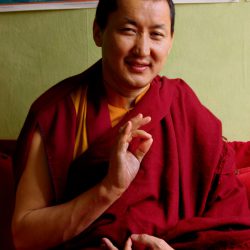 Dzogchen Ranyak Patrul Rinpoche was born close to Rutam Orgyen Samten Chöling (Dzogchen Monastery) in the centre of Kham, Eastern Tibet, in 1963. His mother hailed from the family of his previous incarnation. His father was called Drupa. As a child he demonstrated excellent abilities in learning quickly and effortlessly. He began his studies at Dzogchen Monastery where he was also trained in Tantric rituals and assigned to the position of chöchen, the great chöpon. At that time he participated in reconstructing Dzogchen Monastery by drawing, painting and making masks. Later he continued his studies at Dzogchen Shri Singha University where he studied the traditional Tibetan curriculum from the practices of the three bases of discipline to the highest Tantras. He engaged in the practice of listening, reflecting and meditating through which he gained knowledge of great Indian commentaries and gained meditative experience. Through the practice of discipline he tamed his mindstream.

Among his teachers were great masters such as Khenchen Dechen Namdröl, Drukpa Rinpoche and Shapchoke Pema Kalzang Rinpoche. Patrul Rinpoche continued his career of enlightened activity in Drupong Dzogchen monastery (Dzogchen Monastery in southern India) where he taught as a Khenpo for four years. While there, he founded a Dharma Centre of the Nyingthik Diamond Vehicle. At that time, Choktrul Sogyal Rinpoche bestowed him the title of supreme Dorje Lopön (master of ritual) and requested him to remain in the external seat of the Dzogchen Monastery for a long time. Also at that time, Minling Trichen Gyurme Kunzong Ongyal and Shapchoke Dzogchen Rinpoche announced that he was a true reincarnation of the former tulku and offered him the crown title of holder of the teachings of Drupe Ongshuk Gyalwa Dzogchenpa.

Type and press Enter to search

We use cookies on our website to give you the most relevant experience by remembering your preferences and repeat visits. By clicking “Accept”, you consent to the use of ALL the cookies.
Cookie settingsACCEPT
Manage consent

This website uses cookies to improve your experience while you navigate through the website. Out of these, the cookies that are categorized as necessary are stored on your browser as they are essential for the working of basic functionalities of the website. We also use third-party cookies that help us analyze and understand how you use this website. These cookies will be stored in your browser only with your consent. You also have the option to opt-out of these cookies. But opting out of some of these cookies may affect your browsing experience.
Necessary Always Enabled
Necessary cookies are absolutely essential for the website to function properly. These cookies ensure basic functionalities and security features of the website, anonymously.
Functional
Functional cookies help to perform certain functionalities like sharing the content of the website on social media platforms, collect feedbacks, and other third-party features.
Performance
Performance cookies are used to understand and analyze the key performance indexes of the website which helps in delivering a better user experience for the visitors.
Analytics
Analytical cookies are used to understand how visitors interact with the website. These cookies help provide information on metrics the number of visitors, bounce rate, traffic source, etc.
Others
Other uncategorized cookies are those that are being analyzed and have not been classified into a category as yet.
SAVE & ACCEPT